A new adult contemporary romance by author R.K. Ryals will release on August 2, 2015! It’s currently available for pre-order on Amazon!

Hawthorne & Heathcliff
Author: R.K. Ryals
Cover by : Regina Wamba of Mae I Design
Editing by: There for you Editing
Synopsis: 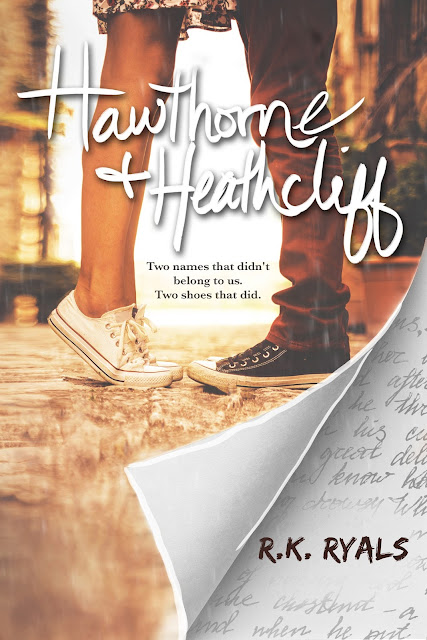 Two names that didn't belong to us. Two shoes that did.

Intense and introspective, seventeen-year-old Hawthorne Macy knows all about being abandoned. She's felt the stark pain of being left behind by the people who are supposed to love her the most; her parents. Raised by her caring uncle on an old plantation, Hawthorne lives her life on the fringes of her small Southern town.

Until she meets his shoe.

Senior year, last period English class, and a pair of silent tennis shoes resting next to hers in the back of the room throws Hawthorne into a world she'd learned to stay outside of.

His name is Max Vincent, but in her mind, he’s Heathcliff. The handsome eighteen-year-old boy behind the shoes will pull Hawthorne into a passionate and unforgettable adventure of self-discovery during a time when love seems impossible.

The first time I ever met him, he was sitting in the back of my last period English class. He was the kind of guy that girls looked twice at but didn’t approach, because no matter how attractive he was, there wasn’t much you could do with a guy who didn’t talk.
Maybe that’s why I noticed him. It wasn’t just because I sat next to him, it was because I wasn’t much for talking either. Our mutual respect for silence was the reason we were relegated to the back. The only difference between us was our appearance. He was handsome enough to be remembered. He was handsome enough to have poems written about him, the kind that called him solemn and stoic, the kind of brooding soul I’d always imagined Heathcliff from Wuthering Heights to have. I was just the strange, unkempt girl with the weird uncle and no parents. I was a bunch of sad stories.
Truth was, life had taught me that words were better spoken when they meant something. Which meant I spent more time talking to my uncle and to myself than I did to those my age. It’s funny, really, how much one moment in your life can separate you from the people you’re supposed to relate to. I’d lost that. I’d lost the need to talk about clothes, dating, and sex. I wanted to talk about the things everyone else wanted to forget; life and death and symbolism.
It was true. I was weird.
I’d only had three loves in my life: my uncle, books, and an overwhelming desire to become a philosophical chef with a Classics degree, because who doesn’t want to eat great food and spend hours lost in history?
It was true. I was weird.
And yet, in many ways, he was, too. So it began, this odd dance of sidelong glances and uncomfortable shifting, as if neither one of us wanted to admit the other was there across the aisle from the other, not talking. For half a year, I spent my last period pretending the guy didn’t exist, that the girls didn’t whisper about him, that the other guys didn’t throw him strange, murderous glares.
He didn’t care.
In passing, I’d heard one of the girls refer to him as Max Vincent, but I’d quit thinking of him as a regular name. In my mind, he was Heathcliff. He was a quiet, young man too large for his desk, his legs always stretched out in front or to the side of his seat to accommodate for his height. Occasionally, his beat-up tennis shoes rested next to mine in the aisle, and I’d stare at them—my foot and his—as if they were more than shoes and feet, as if they represented something larger than that.
Two shoes, my size seven and his much larger undisclosed number.
Hawthorne and Heathcliff.
Two names that didn’t belong to us. Two shoes that did. 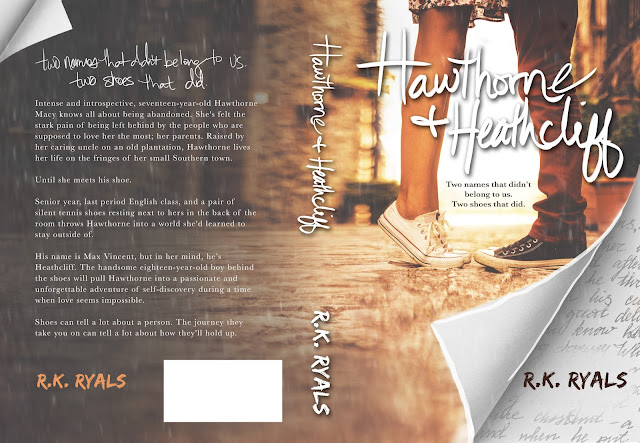