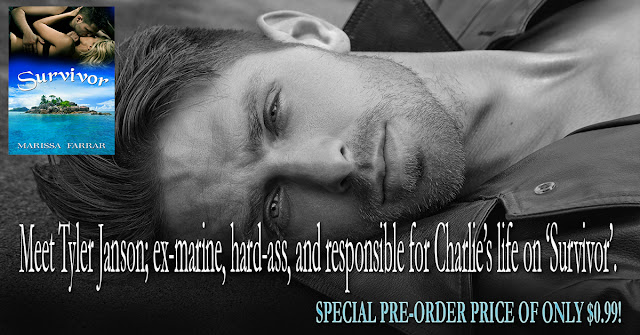 New Release! Romantic Suspense novel, Survivor, by Marissa Farrar. Special new release price of only $0.99 for the first 24 hours only! 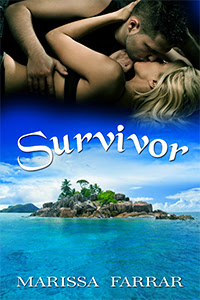 When you are an author, inspiration comes from lots of different places. Sometimes it is overhearing a conversation between two strangers, sometimes it is from reading newspaper articles, it can even come from dreams. In the case of writing Survivor, my inspiration came from my husband’s love of survival shows.
I normally hate my husband’s television choices. We have completely opposite tastes. Where I love fantasy and drama, he prefers documentaries. But one evening we were sitting down to watch yet another show about a guy surviving out in the wild, only this time the survival guy had a minor celebrity with him. I joked to my hubby that she had only volunteered to go on the show so she could get up close and personal with the hot ex-SAS guy, and just that simple comment sparked a little flare of a story in my mind. Right away, I opened a new Word document and started typing.

And so, Survivor was born! If you go and grab your copy now (publication day) you can get it for the special price of only $0.99 instead of the regular price of $3.99!

Broke and fallen from grace after her billionaire father is convicted of embezzlement, ‘It Girl’, Charlie Charleston has little choice but to accept the offer her agent makes for her to appear in the reality television show, Celebrity Survivor.
The thought of being stranded in the middle of nowhere without so much as a scrap of makeup, and all for the general public’s entertainment, scares the life out of her. Charlie hasn’t even so much as been camping before, never mind existed without any creature comforts, and with food she has to catch and kill herself.
Upon being introduced to ex-marine and survival expert Tyler Janson, the man who will be guiding her through all matters to do with surviving in the wild, she wonders if things might have started looking up.
The problem is Tyler seems to think she’s about as pointless as a pedicure, and nothing she does gets his attention.
But when their plane goes down in the middle of nowhere, something Charlie is sure is a set-up by the producers of the show, she is determined to show Tyler Janson exactly what she’s made of.

Like what you’ve read? Survivor is available to buy at the following places for $0.99 for the first 24 hours of publication only!


Marissa Farrar has always been in love with being in love. But since she's been married for numerous years and has three young daughters, she's conducted her love affairs with multiple gorgeous men of the fictional persuasion.

The author of fifteen novels, she has been a full time author for the last five years. She predominantly writes paranormal romance and urban fantasy, but has branched into contemporary fiction as well.

Her short stories have been accepted for a number of anthologies including, Their Dark Masters, Red Skies Press, Masters of Horror: Damned If You Don’t, Triskaideka Books; and 2013: The Aftermath, Pill Hill Press.

If you want to know more about Marissa, then please visit her website at www.marissa-farrar.blogspot.com. You can also find her at her facebook page, www.facebook.com/marissa.farrar.author or follow her on twitter @marissafarrar.
She loves to hear from readers and can be emailed at marissafarrar@hotmail.co.uk.